Probably At The Library

Hi everyone! I am so excited to visit with you here at Probably at the Library. The first novel in my Defying Propriety Series, As a Proper Lady Would, came out on October 1st on Kindle and in paperback. Here is the cover along with the blurbs for both the series and this first book.

We are formed by experiences of our childhood. Family and friends influence our character. Decisions, wise and foolish, direct our path. Through chance encounters and early introductions, our beloved Pride and Prejudice characters come together on a slightly different path which may, to some, defy propriety.

All the books in this series are sweet, clean romances.

In this first book of the Defying Propriety Series, we watch as Elizabeth and Darcy learn what society expects of them, while attempting to achieve what they truly desire in life. The well-known characters, as well as a few new ones, grow from childhood to a marriageable age; some reveal different facets of their personalities, while others are doomed to follow the same paths.

Anyone who follows me on AustenAuthors.net knows that this story began there with a cute scene between a 5-year-old Lizzy Bennet (who had lost her two front teeth) and 12-year-old Fitzwilliam Darcy and George Wickham. I have shared that scene twice, most recently in July of this year, and you can find it here. I thought I would share the scene that follows next with you today. 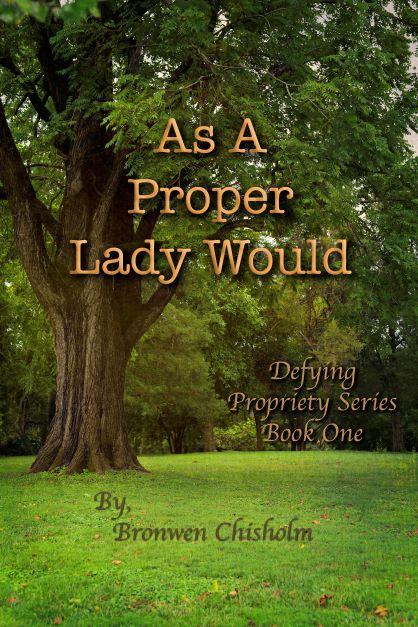 The sun moved lower in the sky, and Fitzwilliam Darcy announced it was time to return to Pemberley. They were crossing by the park benches when his companion, George Wickham, sprinted to one and picked something up from the ground.

“What did you find?” Fitzwilliam asked.

George tossed it at him. Fitzwilliam flinched, which triggered a taunting laugh from the other boy. “It’s just a doll, Fitzy.”

He caught the toy easily and studied it. “I wonder if it belongs to that girl,” he murmured as he brushed the dirt from the doll’s skirts.

“Who? Lithy?” George laughed again and reached for the toy, but Fitzwilliam held it out of his reach.

“We should see if we can find her.” Fitzwilliam looked about, but the park had emptied when teatime approached.

George glanced at the sky. “You can look for her; I’m going home. I’m not getting in trouble for a dumb girl and her lost doll.” He jogged off without waiting for Fitzwilliam to follow.

Unsure where to begin looking, Fitzwilliam started in the direction the lady had led the girls. He stopped when he heard his name called a moment later and turned to see Pemberley’s steward, Mr. Wickham, approaching in a cart with George frowning on the seat beside him.

“Sir.” Fitzwilliam bowed as the cart drew to a stop beside him.

“You boys should already be home, Master Darcy.”

“Yes, sir.” He held the doll out for the man to see. “I was trying to return this to the little girl who lost it.”

“Do you know who she is or where she lives?”

Fitzwilliam shook his head. “I never saw her before. She went that way,” he said and pointed down the street.

“Perhaps she is staying at one of the inns,” Mr. Wickham replied, motioning for Fitzwilliam to climb into the cart.

“Papa, if we don’t return to Pemberley now, we’ll miss tea,” George moaned. “The girl must not want the doll, or she wouldn’t have left it behind in the dirt.”

“She left the doll to scold you,” Fitzwilliam said, elbowing the other boy.

“Scold?” Mr. Wickham’s frown deepened. “What trouble have you been getting into today?” he asked his son.

“Nothing,” George replied as he glared at his companion.

Fitzwilliam squared his shoulders and did not look at his friend. “George was kicking the tree, and the little girl made him stop.”

A smile tugged at Fitzwilliam’s lips. “Perhaps four or five. She pushed him and placed herself between him and the tree.”

The older man’s eyes widened. “And what offense had the tree committed, son, for you to kick it?”

George scowled at the young master of Pemberley but did not respond.

“We were racing, and I won,” Fitzwilliam said when the other boy remained silent.

The steward drew in a deep breath and released it slowly before signalling the horse to move forwards. “Was the young lady well dressed?”

Fitzwilliam frowned, trying to retrieve details of the little girl’s clothing, but he could remember little beyond her eyes flashing angrily at his friend. Finally, he shrugged. “Not as nice as my cousins’, but definitely better than a tenant’s daughter.”

Mr. Wickham nodded and steered the cart towards the Golden Lion. “We shall check here, then return to Pemberley.” He turned to his son and handed him the reins. “Wait here until Master Darcy and I return,” he said with a hint of steel in his voice.

The man climbed down and motioned for the young master to lead the way. They approached the innkeeper, but Fitzwilliam remained silent.

“Master Darcy,” the innkeeper said as he bowed to them. “Wickham. How can I help you?”

Fitzwilliam could feel the men’s eyes upon him, but his tongue would not work.

“Master Darcy found this doll in the park and thought it might belong to one of your younger patrons,” Mr. Wickham finally answered for the lad.

“We have no children staying with us at this time. Perhaps they are at the Stone Well.”

“Thank you for your time,” Mr. Wickham said as he and Fitzwilliam both bowed to the man. Before they stepped out onto the street, the steward laid a hand on the lad’s shoulder. “There are times you will have to speak to those you do not know well, Master Darcy. It would be best if you practised.”

Fitzwilliam nodded but said nothing.

Once they were seated in the cart, Mr. Wickham took the reins from George and turned them towards Pemberley.

“Will we not check the Stone Well, sir?” Fitzwilliam asked.

Mr. Wickham shook his head. “We are already late, and the Stone Well is on the other side of Lambton. We can return tomorrow and see if the young lady is there.”

“Yes, sir,” Fitzwilliam replied as he looked at the doll. He scanned the streets as they passed but did not see the little girl anywhere. He hoped she would not be too distressed to spend a night without her doll. He remembered how his cousin Anne screamed and cried when she lost something, and a shudder ran through him.

Now, a GIVEAWAY! Just make a comment on this blog and Melissa will pick 1 lucky winner to receive an ebook copy of As a Proper Lady Would. Good luck! I can’t wait to read your comments. 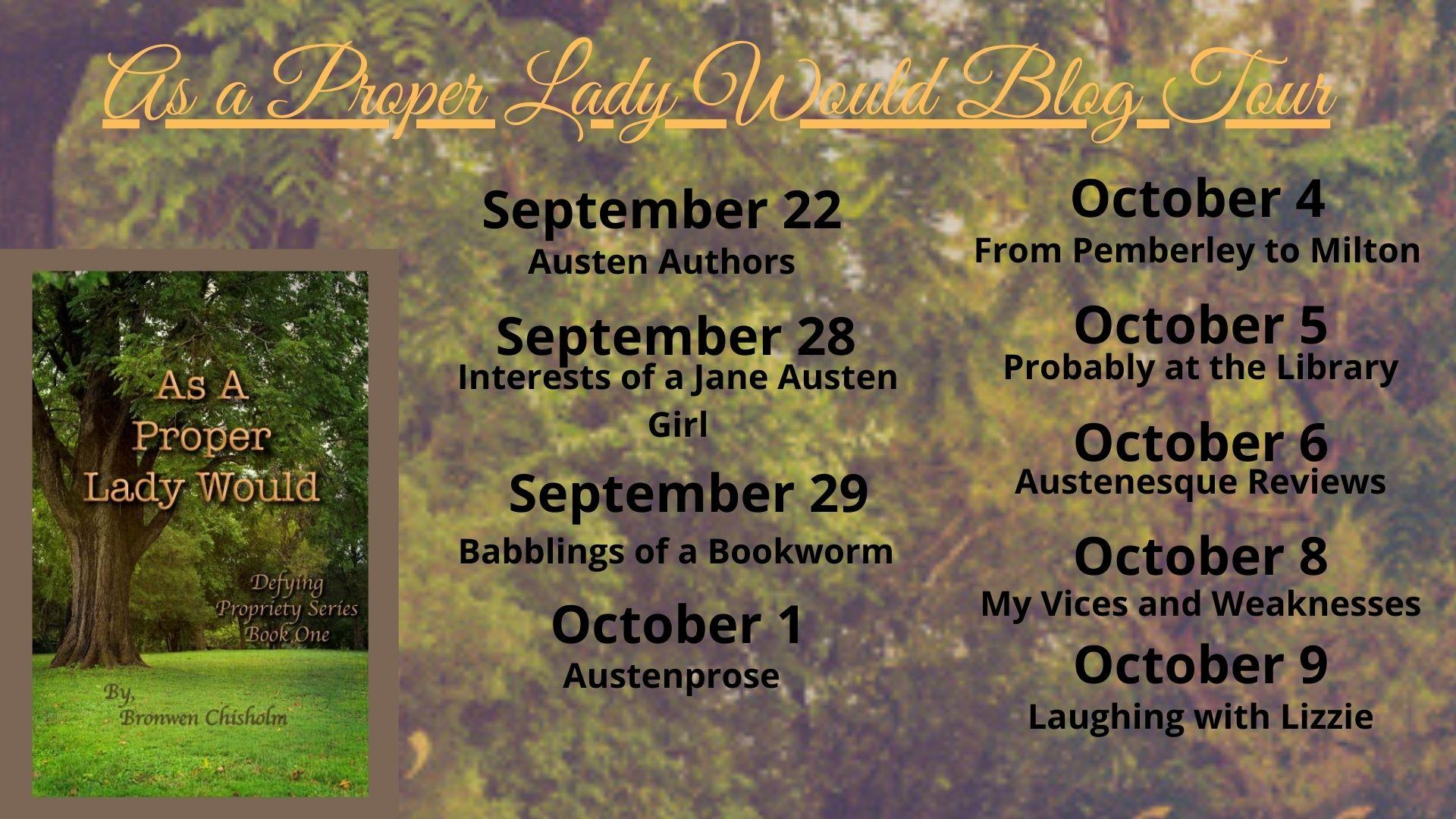 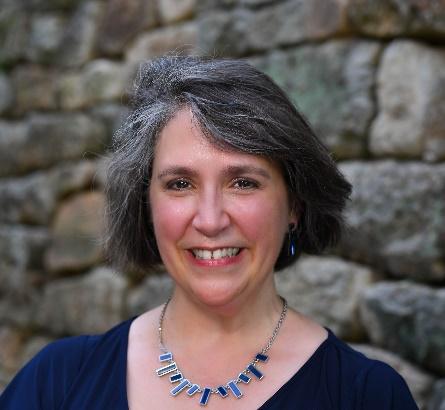 Bronwen Chisholm has released seven Pride and Prejudice variations since 2014. She takes great pleasure in searching for potential “plot twists” and finding the way back to a happy ending.

Her love of writing has led her to several writing groups, and she is currently serving as the vice president of the Riverside Writers and organizes the Riverside Young Writers.

For more information, visit her at www.bronwenchisholm.com.

Thank you everyone for taking the time to stop by. Happy reading, Melissa

Melissa has been in love with books since she was a child. As a young girl, in her Holly Hobby decorated room, she would sit and tape scraps of paper to her books so that she could organize them by the Dewey Decimal System. She is a huge advocate for helping children learn to love reading. Along with hosting an online Regency based book club and a book club at her home, she started a book club for kids at her son’s school. These days, Melissa can be found at the library writing a book review or tucked in some quiet corner having a love affair with a newly discovered romance novel.

This website uses cookies to improve your experience while you navigate through the website. Out of these cookies, the cookies that are categorized as necessary are stored on your browser as they are essential for the working of basic functionalities of the website. We also use third-party cookies that help us analyze and understand how you use this website. These cookies will be stored in your browser only with your consent. You also have the option to opt-out of these cookies. But opting out of some of these cookies may have an effect on your browsing experience.
Necessary Always Enabled
Necessary cookies are absolutely essential for the website to function properly. This category only includes cookies that ensures basic functionalities and security features of the website. These cookies do not store any personal information.
Non-necessary
Any cookies that may not be particularly necessary for the website to function and is used specifically to collect user personal data via analytics, ads, other embedded contents are termed as non-necessary cookies. It is mandatory to procure user consent prior to running these cookies on your website.
SAVE & ACCEPT